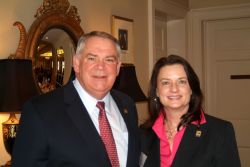 The Commerce Club in Atlanta, Georgia, was the setting for the fourth annual Early County/Atlanta Luncheon hosted by Senator John Bulloch, State Representative Gerald Greene and Early County 2055, and sponsored by the Advancing Early Initiative 2012. The event, held on March 2, 2010, was attended by approximately 108 state department heads, key legislators, Early County leaders and other special guests.

The purpose of the luncheon was to inform key members of state government of the unique and positive opportunities for growth and expansion within Early County; to express appreciation to selected state officials for their past support of Early County; to provide a format for the personal exchange of ideas regarding important issues to Early County; and to establish and solidify relationships between local constituents and state officials.

The Honorable David Ralston, Speaker of the Georgia House of Representatives, addressed the group on the importance of partnerships. Barton Rice, Executive Director of Early County 2055, updated the audience on the beginnings of the Early County 2055 project. He reviewed the history of EC2055, and the groundwork for the project, which was funded through the Charles and Catherine B. Rice Foundation. Lisa Collins, CEcD, Director of Economic Development for Early County 2055, spoke to the group on "The Success of Partnerships." She reported that the community is working with state and federal officials to make measurable progress through their collective commitment to revitalize Early County. Collins stated that since its inception in 2006, the Early County 2055 Economic Revitalization Initiative has moved from a great idea to a compelling program that is surpassing its goals, attracting support from its many constituencies, and being referred to as a model for similar communities looking to improve their economic future.

Ric Hall, Mayor of Blakely, closed out the meeting by thanking the special guests in attendance for working together with Early County to make ideas and visions a reality. He asked for continued support as Early County moves forward in pursuit of economic development goals and improved quality of life for all citizens.