Models for public and private partnerships

Early County has a comprehensive, 50-year Economic Development Master Plan that focuses on revitalizing the existing assets of the area, growing a thriving service and knowledge-based market and shaping a robust road-map for the future. EC2055 was created by the residents of Early County with the guidance of the Miami-based planning and development advisory firm, PlaceMakers, who in 2006 assembled a team of architects, town planners, engineers, lawyers, economic specialists, artists and townspeople to shape the economic vision for the community. The initial funding for EC2055 was a generous grant from the Atlanta-based Charles and Catherine B. Rice Foundation. 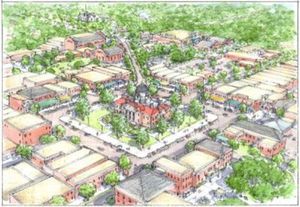 The Master Plan is an all inclusive map to economic growth. The EC2055 Master Plan initiatives began with developing a visual identity, creating a long term vision, and building a blueprint for execution. The Master Plan is the catalyst that the community needed to move Early County’s economic base from agricultural to a progressive service and knowledge-based business environment. It concentrates on a number of discreet programs that include:

Implementation of the plan’s economic development strategy is well underway. By working together, local leadership is successfully completing each EC2055 initiative to revitalize their economy.

EC2012 is a viable component of EC2055. In May 2007, guided by National Community Development Services (NCDS), of Atlanta, Ga, Early County community leaders came together once again to create the Advancing Early 2012 Initiative – a five year $8 million economic action strategy and a component of the overall 50-year Early County 2055 Master Plan. The goals of the Advancing Early 2012 Initiative focus on stimulating economic development through new job creation, enhancement of cultural amenities, removal of dilapidated structures, development of quality workforce housing and much more.

Since the inception of the Advancing Early 2012 Initiative, the community has been hard at work to produce results, which include:
• The City of Blakely and the Rice family demolished close to
200 dilapidated and substandard dwellings.
• An Atlanta-based development company, Hammond Development,
completed construction of Blakely Commons, a 64-unit subdivision
consisting of three- and four-bedroom single family rental homes
as well as a clubhouse.
• Blakely’s East Gateway Project is moving forward. The project is a
visually pleasing entrance into the city at the intersection of the
US 27 bypass and State Highway 62 that will draw travelers off the
bypass into the downtown Court Square of Blakely, consequently
creating additional revenue for the city.
• Phase I, the Environmental Phase, is almost complete and made
possible by Georgia DOT which awarded $500,000 in Transportation
Enhancement program funds to the city of Blakely. This will be
followed by the Right-of-Way acquisition.
• Phase II, EC2055 and the City of Blakely has completed an
application for an additional $1 million for GDOT TE funding for
Phase II of the project. Phase II will consist of a welcome and
educational center, landscaping and sidewalks from the project
to downtown Court

Retail options expand in Blakely. When the Piggly Wiggly of Blakely opened for business in June, 2009 it signaled opportunity for increased retail expansion. Over 600 applications were submitted for the 52 new jobs created. These new jobs bring $450,000 more in personal income per year, provide a minimum of $250,000 in new bank deposits per year, an additional $280,000 in retail sales per year, and a projected additional sales tax of $500,000 over the next three years for Early County.

Today, the community continues their efforts to make progress through their collective commitment to revitalize their economy. Early County 2055 and the Advancing Early Initiative 2012 are examples of true public-private partnerships that consist of the City of Blakely, Early County Board of Commissioners, Early County Development Authority, Early County businesses and private citizens and the Rice Foundation.